Dogs of the Year

Nellie had an outstanding win in the Open Stake on 22 September.

It was fitting that Byron Kendall judged this trial as he also donated the shield for Retrieving Dog of the Year.

This is Nellie’s third Retrieving Dog of the Year.  Well done Nellie

Marley had an outstanding win on 26 May with 5 finds, 2 retrieves and 2 backs.

Posted by WGAA Working Gundog Association of Australia (SSAA) at 15:56 No comments:

Sunday 17th of November saw the finish of what has been a very busy second half of the year for Working Gundogs with a training day and Christmas breakup. Since late June two retrieving trials, a field trial, the inaugural Non-Indigenous Game Bird trials, the AGM, training days and of course the Shot Expo (4 shows put on over two days) have been held. All of these events have meant planning, meetings, unpacking and then re-packing equipment, endless phone calling, texting and meetings. A big thankyou to everyone who was in some way involved in any or all of this programme.

Sunday’s event saw some 50 plus members turn up for a relaxing training day and pre-Christmas lunch in a picture-perfect venue at Riddells Creek. Training took something of a back seat to sitting around after morning tea and cake. Chatting and relaxing were the order of the day while being entertained by the dogs retrieving off the jetty! The free lunch was in itself a triumph, with head cook Jamie Stellini pulling out all stops with a splendid BBQ, along with many and varied salads topped off by a delicious dessert. The monster raffle was generously supported by members and the money raised will go towards more training equipment.

To all our members, have a safe and happy Christmas.

Posted by WGAA Working Gundog Association of Australia (SSAA) at 15:41 No comments:


The WGAA demo team did the club proud at the SSAA Shot Expo over the weekend. Breeds represented were Labs, L’Epagneul Bretons, Weimaraners, GSP’s, Golden Retrievers and Pointers. Well done to Shane Emond for his work on the PA and his inclusive work with Senator Bridget McKenzie (Deputy Leader of the National & Minister for Agriculture) and Shooters, Fishers and Farmers Party leader, Jeff Bourman (MLC for Eastern Victoria). Both politicians mingled with spectators and handlers and were very appreciative of the quality of work.

Spectator numbers were again huge and they were appreciative as the dogs put on brilliant displays of gundog work expertly organised by our WGAA Training Officer, Kevin Phelps. Star of the shows was probably Steve Luck’s GSP Meg who featured in several hunting scenarios. Great work Meg. The gundog demo wouldn’t be complete without mentioning Sam Heyes’ chocolate lab, Nellie and her magnificent retrieve of a giant Canada goose dummy and her ever popular finale retrieving tinnies from an esky!  Well done also to newcomers Sam and Nigel.

WGAA recognises the support and encouragement of Geoff Jones, SSAA National President, Denis Moroney, SSAA Vic State President, Jim Jeffrey, WGAA National Discipline Chairman and Sam Talbot, Australian Shooter Communications Officer, all of whom took the time to attend the display. Lots of thanks also to all at the Vic State office for the smooth running of everything including permits, passes, stand decoration, printing of brochures and general good spirits.

Posted by WGAA Working Gundog Association of Australia (SSAA) at 09:25 No comments:


WGAA struck the jackpot with a beautiful day and a perfect property for a retrieving trial. Sunshine all day long and a mild temperature set the scene for a very successful Intermediate and Open stake at Nagambie. Judges Bill Allen (birthday boy) and Byron Kendall (recently returned from a 3 day judging stint in Queensland) did a sterling job setting testing runs and WGAA is extremely appreciative of their efforts. As usual WGAA went above and beyond and the lunch put on by Kevin was one to remember.


Posted by WGAA Working Gundog Association of Australia (SSAA) at 08:52 No comments:

Our next training day is Sunday the 15th of September. Training will start at 9.00am with a bbq lunch and soft drinks at 12.00.
For more information contact our Training Officer, Kevin Phelps 0407 091 221 Directions: Meet at the Emu Creek Bridge on Konagaderra Rd, Clarkfield. To get to the Emu Creek bridge head North West on the C743 through Bulla. Turn North onto the Melbourne-Lancefield Rd. Travel 13km then turn right onto Konagaderra Rd and it's about 1km along that road to the bridge. Anyone with a gundog is welcome. We cater for beginners, puppies and experienced handlers.
Posted by WGAA Working Gundog Association of Australia (SSAA) at 17:22 No comments:

Clashing with Father’s Day whittled down our numbers somewhat but the stalwarts that turned up did WGAA proud. The usual protagonists that competed certainly had their work cut out for them – the weather conditions were a tad difficult – a freezing wind that was unrelenting all day.
The competitors were Joe and Steve with their GSPs, Barry and his 2 pointers, Wayne and Eric with their Brittanys and Richard with his Wei cross.
The judges were Kathy Oliver & Kevin Phelps, Sam put the birds out on his ATV and Shane took the pics.
It was great to see such a large turnout of supporters including the Beesley’s who were up for the day from deep in deer country at Jamieson.
We are still fine tuning this new trial format but we are improving with each trial. The standout dogs on the day were Steve’s GSP Meg, Barry’s pointer Kio and Wayne’s Brittany Boss. However, the poor shooting became too much for the judge and after a long (really long) heat between Meg and Kio a ‘no result’ was declared.

Posted by WGAA Working Gundog Association of Australia (SSAA) at 16:59 No comments: 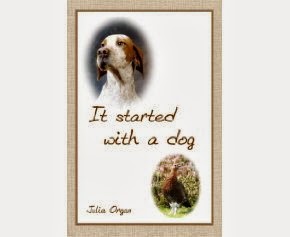